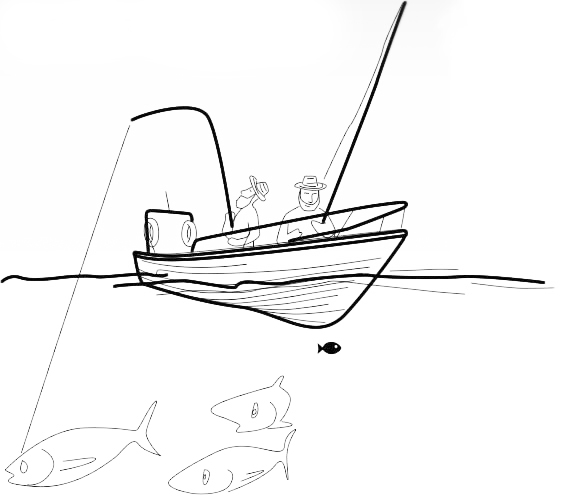 This technique is called “Jump and Pole Fishing” with live bait because of the characteristics of the procedures its based on and because it uses small living pelagic fish as bait (mackerel, sardines, mackerel, horse mackerel, etc). As the name implies, it involves a pole (which varies in size and shape) and the jumping technique, which is to pull the fish on board with a single movement, making it jump. Of course, this maneuver is more difficult the larger the size of the fish.

It is an active and dynamic fishing that looks for the shoals of tuna on the surface of the sea, and attracting them to the vessel using live bait. There are two extremely important factors in this type of fishing: the great voracity that tuna fish have when they are feeding, sometimes leading to frenzy behaviors, and the ability that the fisherman has to elude tuna, luring it to his hook.

One aspect of great interest in tuna fishing in the Azores is that it depends directly from another type of fishing, the catching of live bait. In the Azores, this is done with small encircling nets, or "enchelavares" that capture small fish on the shore, and stores them in large tanks (“tinos”) on the vessel. Without these small specimens it wouldn’t be possible to attract to the surface the large shoals of tuna.

The ecological importance of Jump and Pole Fishing

The fact that the fishing arts used in the Azores are easily maneuvered and controlled by fishermen (example: one man = 1 pole = 1 line = 1 hook) allowing for the capture of just one individual at a time is the main reason for this success in selectivity. Given the simple nature of the gear used, the fisherman can select the fish, therefore avoiding capturing younger fish or non commercial species, or species that are importat for the conservation of nature.

As an appreciation and ecological recognition of this fishing technique, non-governmental organization "Earth Island Institute" certifies, since 1998, through an Observation Program for the Fisheries of the Azores (POPA), the tuna fishing in the Azores as being "Dolphin Safe". Recently the same institution certified the same fishery as one of the first in the world to comply with all the criteria for FOS "Friend of the Sea" certification.